The advantages of lime mortar where the repointing of brick built period properties is concerned in comparison to cement mortar.


Cement has been around for decades but in relation to lime it is a relatively new building material.
Invented in 1794, and patented in 1824, cement was originally intended for engineering works and never domestic dwelling construction. Nevertheless, it has now become one of the most prolific building materials due to its use in house building being popularised after the Second World War.
But why substitute lime, a perfectly good building material, which had been around since Roman times and has enjoyed worldwide success?
1) In the 1940s it was well known that non-porous mortars were not ideal for building. However, as traditional building materials were in short supply after the war it was considered a viable and necessary alternative as  there was a massive housing shortage and new buildings needed to be built quickly and cheaply.
2)      Cement was cheaper than lime and the war effort had cost everyone in so many ways so it was the obvious choice. Even now a 25 kg bag of cement can be bought for a third of the price of a bag of lime and it will also go much further.
3)      Cement is quick. Once a course of bricks has been laid, or a strip of pointing mortar applied, there should be no need to attend to it afterward except for a quick brush. This is in direct contrast to lime which has to be attended to until dry.
4)      Contractors who use cement do not need to be as skilled as those who work with lime and often charge less.
The art of good mortar was not lost the minute cement became popularised because many builders applied their knowledge of lime mortar to the emerging and widespread use of cement. They understood that the ratio of sand to cement and the grading of sand particles were key issues where the use of building with bricks was concerned and therefore they always mixed a weak mortar to accommodate movement and thermal expansion. In many cases this was 13:1:1. That's 13 parts sand, I part hydrated lime and only 1 part cement. It still meant there was no porosity in the brick joints but a softer mix meant less chance of cracks as buildings moved due to thermal changes and shifting ground. Subsequently, new developments in construction soon meant that eventually solid walls began to be phased out in favour of those built with cavities and air bricks. These, and the introduction of deeper foundations,  further negated the need for a soft and flexible mortar. It was also understood that a strong mix was more weather resistant and mortar mixes eventually became harder than the brick and stonework it was holding together.

The result of the above was the eventual extinction of knowledge concerning lime mortar from the building trade and the introduction of an ideology based around the belief that hard mortar was in some way a good thing. This happened as older craftsmen retired and others made their exit from the profession - those left were men who had never used lime and knew nothing about it. England quickly became the European capital for the use of Ordinary Portland Cement (OPC) whereas other countries simply banned its use where brick and stonework were concerned from the get-go.

Nearly 70 years on we find ourselves beginning to understand our OPC inheritance. The widespread use of cement where repointing old buildings is concerned has had far reaching consequences. Delightful brick built period properties which used to please the eye have simply been covered in unappealing grey cement. This is unfortunate for a number of reasons; one of which includes that the once porous joints which the buildings and their occupants used to enjoy are now sealed and moisture cannot be wicked away.

People often say that when a building has been repointed in cement mortar that it is no longer able to ‘breath’ in relation to moisture expulsion. Unfortunately this term has almost become a cliché. A more appropriate anology would be transpiration because porous joints have always enabled the built environment to expel moisture away in the same way as a plant or tree transpires it. Lime enables moisture to travel through a wall in the same way a plant employs capillary action. Water molecules are able to cross a network of microscopic bridges which eventually lead to the atmosphere. Add cement to a lime mortar mix and it becomes polluted. The upshot is that the potential for the development of this bridging network is either curtailed or destroyed all together. The result is often damp.
Using cement mortar to build with effectively glues the bricks together. This gluing effect creates further problems as the moisture trying to escape from joints rots the bricks when it is held back.  It’s always worth remembering that bricks – especially those used on period properties - are very soft. Sticking them together with rock hard cement damages them.
Another problem inherent in the use of cement mortar trowelled over lime joints is that it results in cracks because the cement is brittle. When the cement cracks, it eventually falls  out.  It could be argued that at least the cracks open up the building a little and allow some free movement of moisture. However, all that happens is that moisture is held behind an impervious cement shield and is unable to escape. The end result is that using cement over already lime mortared joints simply results in the property being unable to self-heal.
I read a surveyor's report recently and it highlighted that there are a limited number of contractors who are experienced in working with lime mortars  and with stone walling.  In fact, "Finding people who understand lime can be difficult and a lack of understanding" – as Kevin McCloud from the TV program Grand Designs has pointed out – "can be detrimental to a build or property refurbishment." However, skilled and knowledgeable craftsmen do not come without a  price tag. The problem many people have with this is that they don’t understand why lime mortar repointing costs what it does. The fact is, joints have to be well recessed - I usually go down at least 25mm - and this takes time. Add to this the fact that the joints often differ in size and therefore require investment in different  tools with which to rake out and you're half way to realising why it costs what it costs. Couple to this the fact that the mortar has to be applied when it is stiff  and you can see that it's a slow process. Of course, different size joints (it's usually the verticle ones which are much narrower) doesn't just mean a selection of machines and hand tools to remove the mortar, it also means a selection of hawks and trowels to apply it. I'd like to say it stops there, but it doesn't. When cement became popularised everyone was using it and now just about every wall or house that I work on has some. It needs to be removed and again this takes time - specially if the cement to sand ratio is high or it's been mixed with sharp sand. 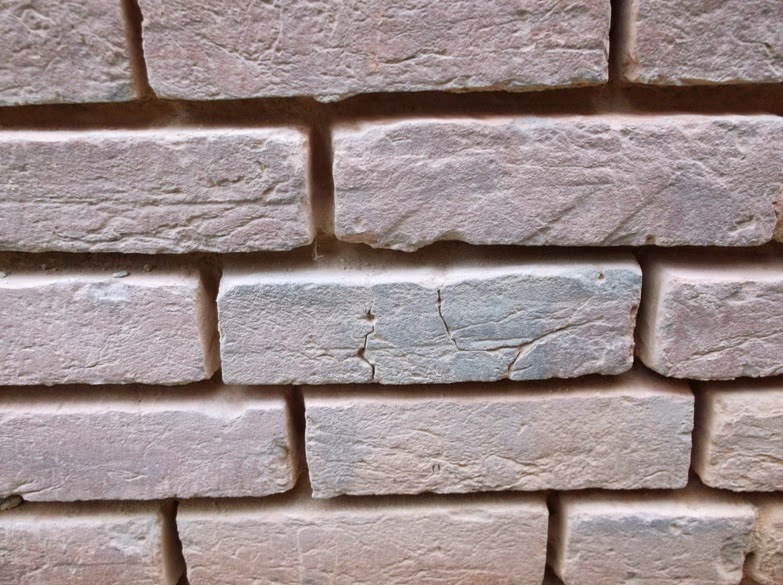 The above photo is taken from one of my jobs and shows the necessary depth which one needs to go to in order to achieve good adhesion of mortar where NHL 3.5 mortar is specified.

The issue of higher cost is further compounded by the fact that lime simply won’t go as far as cement because the modern mix is approximately 5 to 7 parts sand, 1 part cement and 1 part hydrated lime. In direct contrast, a lime mortar mix is 2 to 3 parts sand and 1 part lime. What this translates to is twice as much bonding material is needed at three times the price. Once applied – as mentioned earlier – lime must be attended to and, depending on the situation, might not be ready to be brushed for days. Once dry enough however, the mortar then needs to go through various different trowelling and brushing stages. During these, cracks are ironed out and the aggregates are brought to the surface. In direct contrast, an adequate rake out depth for cement is only a few millimetres and the rapid chemical set simply means a quick whizz with a pointing trowel completes the job. There’s no need to keep returning to site after the last trowel full has been applied, the tools can be packed away and an invoice submitted. In direct contrast, a lime mortar repointing job might mean a few return trips to site to check that the mortar has reached a certain point in the curing process to be brushed. In the case of lime putty it could take longer. 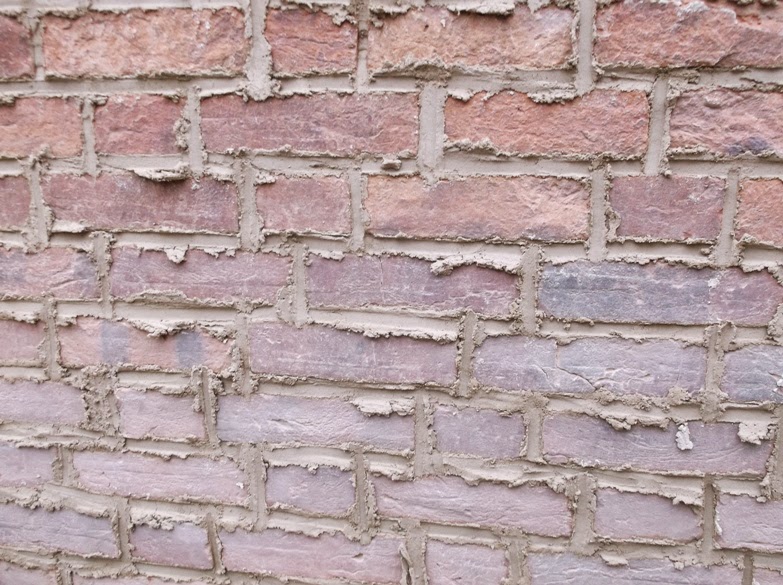 The above photo show what mortar looks like after its been applied and before it's been brushed. 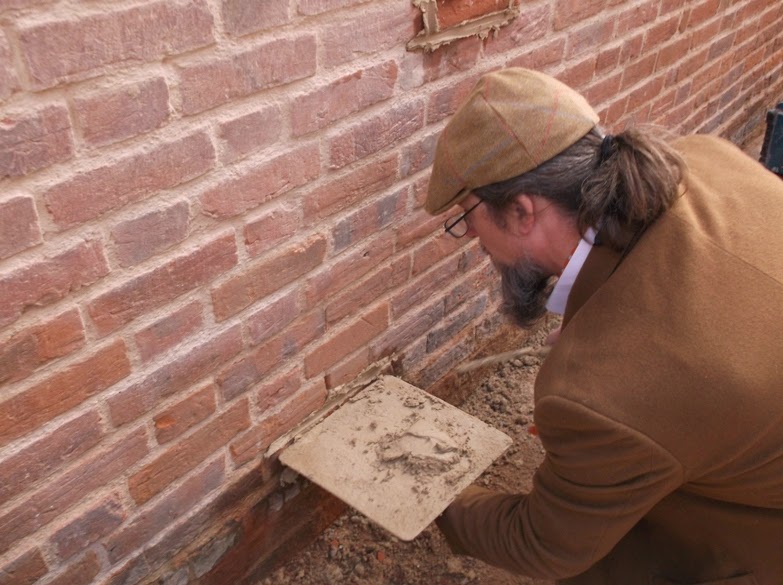 Touching up the finished article


From the above information it should now be clear that embarking on a relationship with an older property is something to be viewed with caution. However, even more prudence should be used when considering an older property which comes with the addition of modern building materials used as a substitute for traditional ones. I’ve recently been working on such a property and I can tell you that the damage which cement does to older houses is more than can be imagined when initially viewed by the uninitiated.

Mike James
I initially began my career 15 years ago where I started developing a knowledge base in drystone walling, horticulture and lime mortar. After training as a garden designer I then began turning my drawings into fully installed gardens. I carried on working with mortar and stone and was drawn further into the skill of stonemasonry until I eventually gave up my other interests to work full time on period properties.